As this list is not complete, please help us out by sending your inputs at info@kyosho-optima.fr

- Ever wanted a wing mount for your Optima, well Kyosho made one: OT65 Wing Mount that fits the Ultima as well. Now lets find an alternative.

Something about a Rocky. I think! - from RC10Talk.com

Pictures of the LA245 shaft compared to W5061 and the 12mm Hexes for the LA245 as per the content from Coelacanth in the RC10Talk Thread. 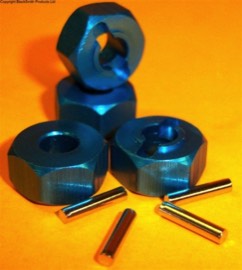 As this list is not complete, please help us out by sending your inputs at info@kyosho-optima.fr

« Picture and comments by Eddie Goodridge »

The 4 lines in the blue endbell above the line in the can? (top pic)....if those move right ( direction of the arrow) timing increases...if they move left, timing decreases...its just a different view so you can see the timing marks most motors have

Can be helpful for people who lost some parts.

I have found this picture from RC10talk.com, Coelacanth from Canada was the one who created this picture, thanks to him!